When I heard that KROQ radio disc jockeys Frazier Smith and his band of crazies were going to make their first live appearance at the Sweetwater Cafe in Redondo Beach, I knew I had to be there.

The event took place on a Monday night, traditionally slow for nightlife; but when I arrived at Sweetwater Cafe a few minutes before nine o’clock, there was already a line of eager people curled down the block and around the parking lot waiting to get in.

As more people drove up and got out of their cars the excitement mounted. The crowd’s general curiosity peaked and the faithful listeners of a media whose stars are disembodied voices whizzing along air waves took full advantage of their opportunity to actually see — in the flesh — what KROQ personalities and listeners looked like.

Eventually, everyone was checked out, categorized and possibly filed for future reference.

As I entered the front door I was stopped by a tense young lady in glasses who physically blocked my entry until I persuaded her that the chancellor of Sweetwater, Richard Stacey, had made arrangements for me to attend.

Richard came over, shook my hand, told me I could find Frazier upstairs and that I should enjoy myself. Then he disappeared.

I found Frazier hanging around a hallway, appropriately enough, with a group of his cronies. He said he would be glad to talk to me later and then he was swallowed up by the newest mass of stone-faced groupies who had been herded up or down, depending on where he was standing, the length of stairs that connects the back stage area.

I watched as Frazier moved among the crowd, seemingly at ease, talking freely and generating an electric response of approval. Yet, he was clearly cautious, somewhat removed, as though he was a lone swimmer in a school of sharks compiling data for a shark steak cookbook.

To be sure, many of those back stagers were genuine and honest friends of Frazier but I could only guess at which ones. They all had very sharp white teeth.

About this time the entourage of popular singer and disc jockey Jimmy Rabbit surfaced. Less in number than Frazier’s delegation they were none the less as enthusiastic in their belief of the talents of Jimmy Rabbit.

There seemed to be a sort of competition between the two groups and though Frazier and Rabbit were friendly enough toward each other, one could sense a jockeying between them as to who would be the real star of the evening.

However, some of that energy could be attributed to a reported dispute between the Rabbit and KROQ management over previous Rabbit appearances on the station.

Then the fans began screaming for Frazier.

He didn’t let them down, wearing one of his famous “Hurt Yourself” T-shirts with its throbbing heart daggered emblem, he and the Hollywood Niteshift (Phil C. Austin, Michael C. Gwynn, etc.) put on a good, albeit slightly disorganized show.

There is a strong promise here, for the performers are talented and producer Al Ramirez is able to push the right buttons to make this machine work. Let’s hope they don’t run over themselves in the process.

Later, as I interviewed him in a dusty sign-cluttered room in a hidden corner of Sweetwater, I found Frazier to be bright, articulate and rather frustrated.

He complained that if he could get a regular television show he would “set us free from our mundane reality.” He also fancies himself a low budget Johnny Carson but in that comparison, this writer feels he sells himself short.

Smith’s power newscasts show excellent writing talents and originality and he is undoubtedly an exciting performer as Monday’s audience discovered.

However, Frazier Smith may be his own worst enemy. There is a question as to his commitment to his work. Does he really spend enough time writing? Will he always show up? One back stager told me that several of his friends were afraid he might not even attend last Monday’s scheduled appearance.

When I asked him about his writing efforts he seemed flustered — a talent struggling for realization but a real talent nonetheless.

Frazier Smith and Jimmy Rabbit. Remember those names — you’re going to hear a lot more of them. 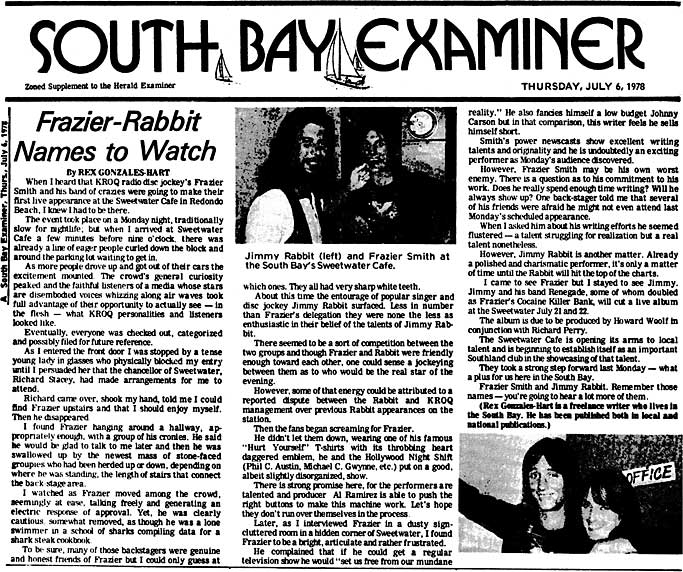 Press coverage of the Fraze